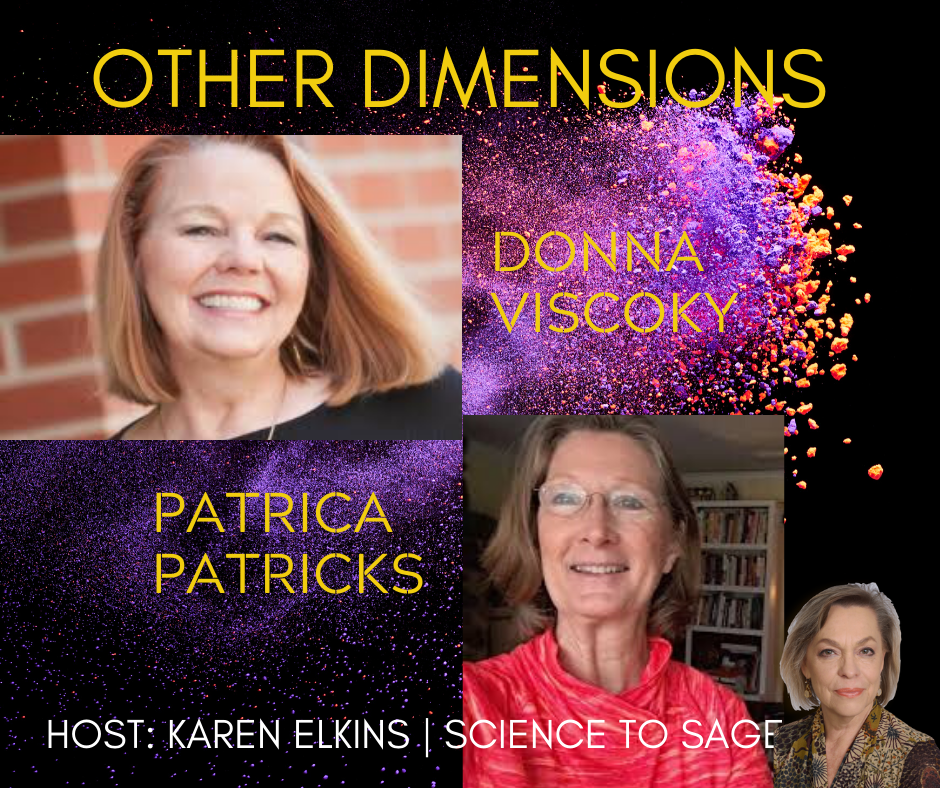 DONNA VISOCKY – Talks about her journey after the lost of her daughter.

Donna is the owner and creative director of BellaSpark Productions, Donna Visocky, knows a great deal about connecting with Spirit and awakening to greater possibility. Devastated by the tragic death of her 21-year old daughter, Kristi, in a car accident, she searched for answers to the nagging questions of “why.”

It was this life changing event that took her into the world of the unseen. She knew Kristi was still here but how could that be possible? With her natural sense of curiosity and love of learning, Donna began a new journey of exploration into spirituality and the expansiveness of life – both seen and unseen.

It was in Kristi’s life that Donna found those answers. “It was Kristi who brought me here, to this place in my life; who opened the windows of my mind to the wonders and blessings of the universe and the realization that this is just a small blip in the journey of our souls,” she says.

BellaSpark Productions was born to contain these new experiences. Bella means Beautiful and Spark is for the Divine Spark in all of us. For the past ten years, Donna has met, interviewed and facilitated conversations with hundreds of the world’s top visionaries, change-makers, speakers, artists and musicians who bring their gifts and talents to help our individual spark to grow. She has created events and conversations in several US and Canadian locations and developed BellaSpark magazine to share the stories more widely.

Through BellaSpark, she honors her daughter’s memory by celebrating the beautiful, passionate spark of inspiration she knew her to be. 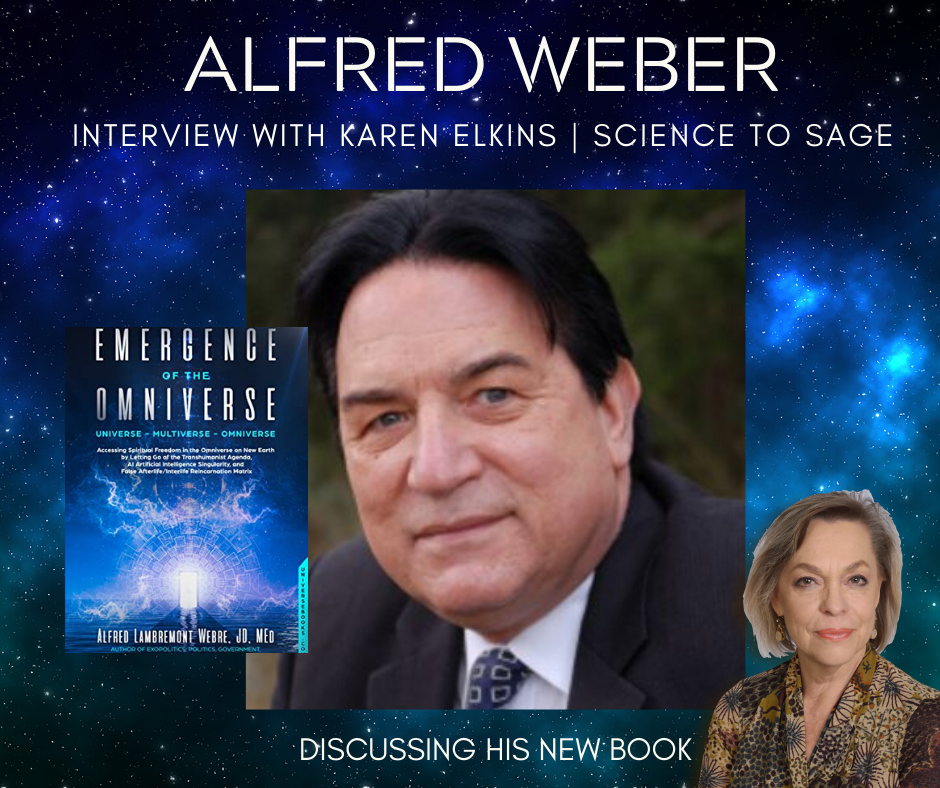 Emergence of the Omniverse

Accessing Spiritual Freedom in the Omniverse on New Earth

by Letting Go of the Transhumanist Agenda,

Emergence of the Omniverse (2020) is one important tool of liberation from our presumed status as a prison planet for Souls in an enforced, unconscious reincarnation birth-death cycle that cosmologist Wes Penre and Futurist Webre document, providing us with powerful strategies to exit the false Afterlife/Interlife Reincarnation Matrix into the larger Omniverse.

The Omniverse Equation is:

Futurist Alfred Lambremont Webre’s principal social contributions have been (1) founding the science of Exopolitics through his 2000 book Exopolitics, (2) the 2014 discovery of the Omniverse as the 3rd major cosmological body [after the Universe and the Multiverse] through which humanity understands the cosmos, and (3) the development of the Positive Future Equation that describes Soul development in our Universe & Omniverse. 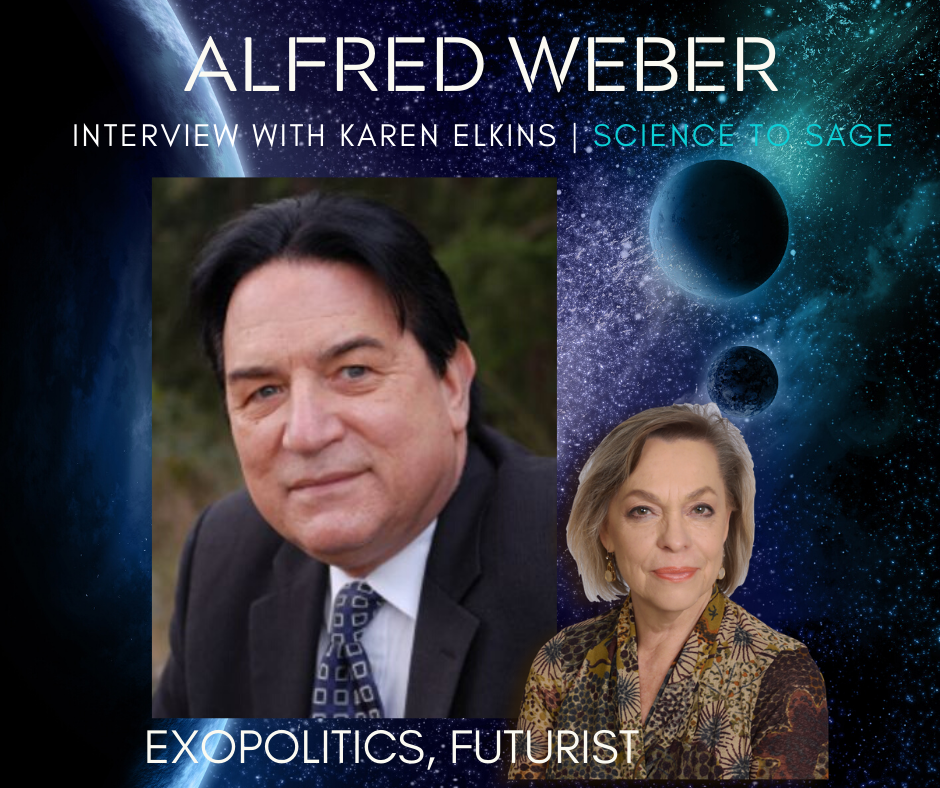 “Futurist Alfred Lambremont Webre’s principal social contributions have been (1) founding the science of Exopolitics through his 2000 book Exopolitics, (2) the 2014 discovery of the Omniverse as the 3rd major cosmological body [after the Universe and the Multiverse] through which humanity understands the cosmos, encapsulated in his book The Omniverse, (3) the development of the Positive Future Equation & the Ascension Hypothesis that describes Soul development in our Universe & Omniverse.

In Exopolitics, while a Futurist at Stanford Research Institute, Alfred served as director of the 1977 proposed Carter White House Extraterrestrial Communication Study, as well as a Disclosure Project witness in 2001.

A leader in public broadcasting, Alfred produced the Instant of Cooperation, the first live radio program in history between the Soviet Union [Russia] and the United States, nominated for an award at the UN General Assembly (1987). Alfred has been host on WBAI-FM (New York) and Vancouver Coop Radio and he has been featured on major international networks including CBC-TV, CBS-TV, CNN-TV, TruTV, PressTV, and others

“Similar to the two autobiographies mentioned above, in your own autobiography, you have the immense courage to share with the reader both your hardships and your achievements, throughout various phases of your current incarnation; in a candide and original manner. Your autobiography stands apart from theirs because you have written it for the altruistic reason of sharing your current “soul journey”; as a star chart, or road map, to help to inform, educate, empower, enlighten, and expand the consciousness of humanity on Earth.

“Your autobiography, My Journey Landing Heaven on Earth, is another ‘consciousness raising’ work, par excellence” 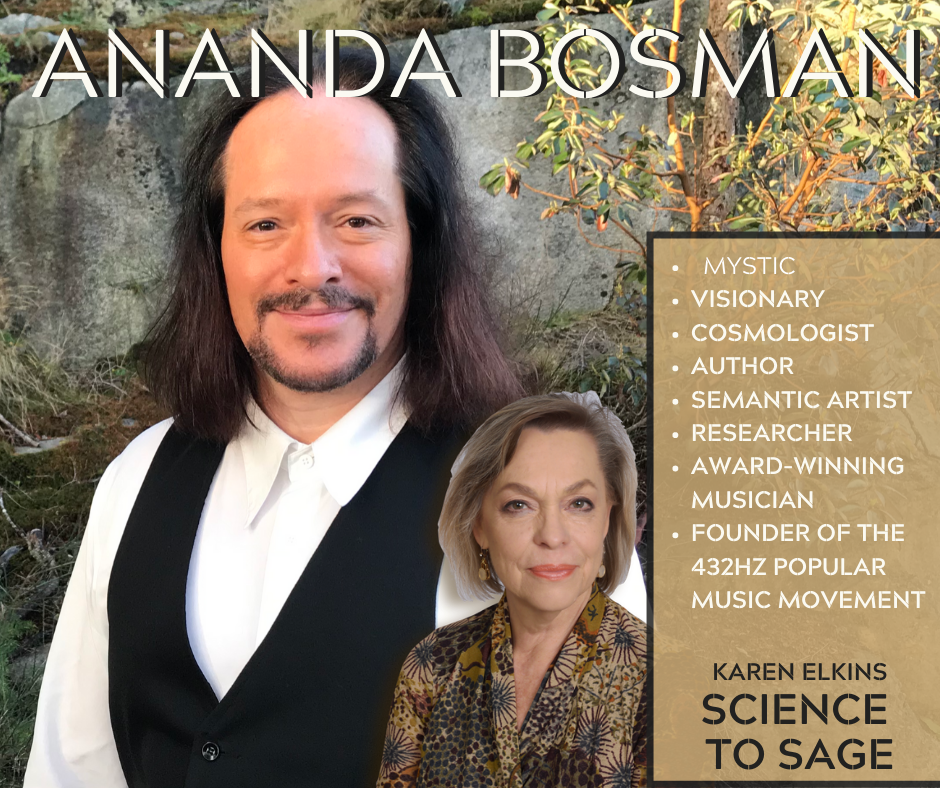 He is a Visionary, Cosmologist, Author, Semantic Artist, International Researcher & as an Award-winning Musician the Founder of the 432Hz popular & electronic music movement during the 1990’s to which he contributed his own Musicologist Theory “Universal Tempering”.Appearing in international radio broadcasts, TV productions & cinema movies worldwide, he is regularly invited as a keynote speaker to numerous international conferences.

Since 1990 he has given many hundreds of lectures, seminars & workshops in over 25 countries, using state-of-the-art multimedia presentations that rivet the audiences with inspiration.

Following two NDEs in his teens, Ananda had access to a source of numinous intelligence, the Emmanuels, that expanded him into superconscious states of being.

As a result, he became a detailed researcher and developed a Unique Cosmology and Semantic Art, as well as his Diamond Body Lotus Training Techniques. In 1992 Ananda cracked open the Dark Room (DR) Secret of the Ancient eastern & western civilisations and founded the DR Inner Light Retreats, where he guides hundreds of pilots through 14 day light isolation.

As a mystic he was witnessed to emerge from invisibility by numerous witnesses, on several occasions in his remarkable life. 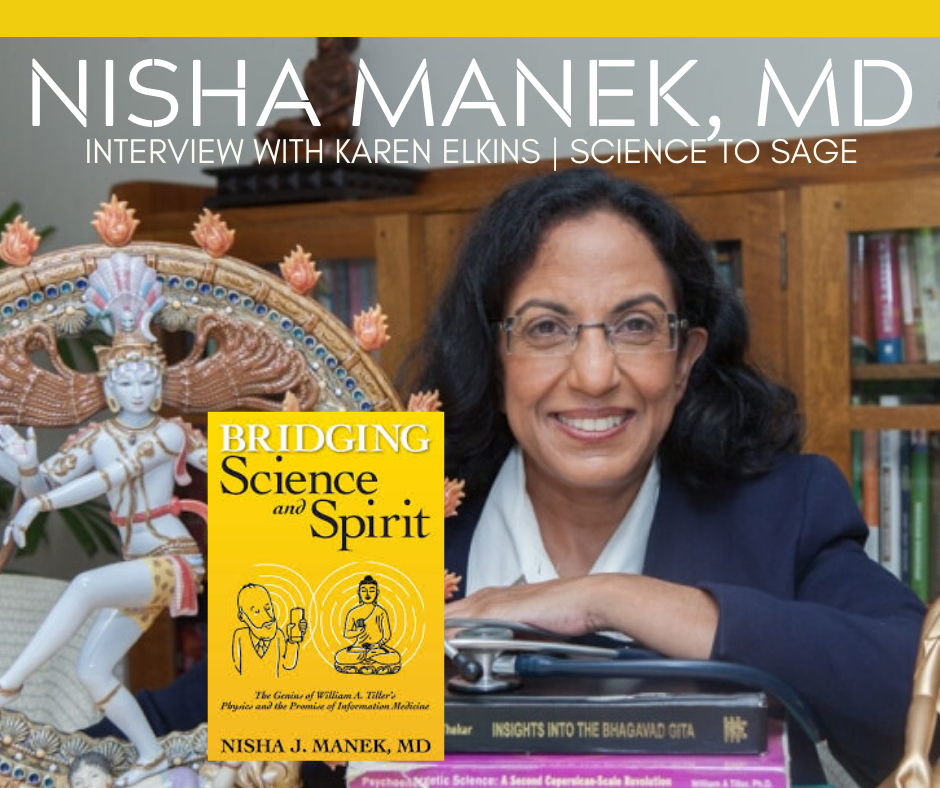 Fascinated by the mysterious power of human intention to make things happen? Discover its real-world applications by exploring the breakthrough research of psychoenergetic science.Does the physics of consciousness have you scratching your head? Want to know how being intentional can improve your life? Ever wonder where science and spirituality intersect? As a protégé of Dr. William A. Tiller, Dr. Nisha Manek is well-versed in the trailblazing scientist’s cutting-edge research and theories. A former esteemed member of Mayo Clinic’s Division of Rheumatology and an internationally recognized leader of Integrative Medicine, Dr. Manek is at the forefront of innovative approaches to health and wellness. Now she’s slicing through the scientific jargon with an insider’s look into how intention will be the next big medical breakthrough.Bridging Science and Spirit: The Genius of William A. Tiller’s Physics and the Promise of Information Medicine is a beginner’s handbook to this pioneering field. Using lab-based evidence and illuminating illustrations, Dr. Manek connects current scientific understandings of thermodynamics and the nature of awareness with universal spiritual truths. With these thought-provoking theories driving practical techniques, the medical and technological evolution inevitable in your lifetime is stunning.In Bridging Science and Spirit, you’ll discover:- An easy-to-understand overview of William A. Tiller’s most influential work- Seven pillars that support the shared principles of science and spirit- More than sixty drawings to clearly illustrate the core scientific concepts- An exploration of the levels of consciousness and how they impact your relationship with reality- An entertaining mix of history, physics, and spiritual anecdotes, and much, much more!Bridging Science and Spirit is a simple guide for unlocking the capacity of human intention. If you like expert insights, complex scientific concepts explained in everyday language, and intellectually energizing material, then you’ll love Dr. Nisha Manek’s unprecedented resource.Pick up Bridging Science and Spirit to expand your mental horizons today! 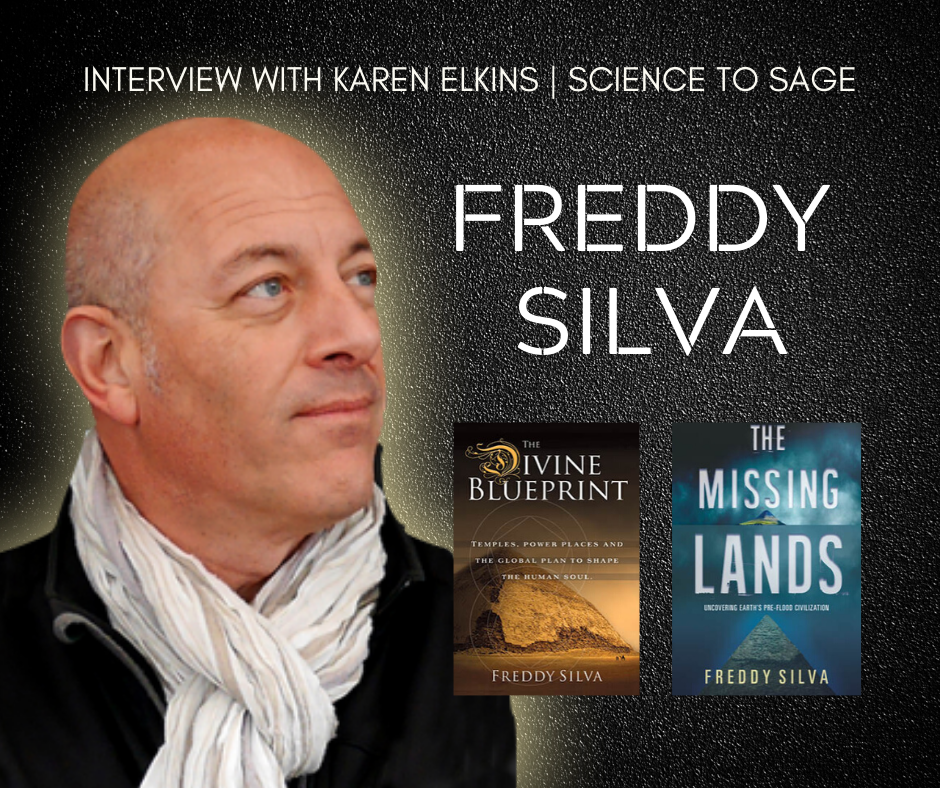 Humanity’s recent development was the subject of an investigation commissioned by NASA, which pointed to a disturbing trend in evolved civilizations ‘suddenly’ appearing completely developed, to technology and agriculture ‘suddenly’ appearing around 8000 BC, and to science, mathematics, and astronomy ‘suddenly’ manifesting in hotspots like Mesopotamia, Egypt, Yucatan, Peru, Japan, and China. What all these cultures share in common is the assertion that they inherited a civilization lost to a catastrophe caused by a fragmented meteorite, and an accompanying global flood that closed the Younger Dryas circa 9700 BC.

Freddy Silva takes us on a global tour to Easter Island to meet the Urukehu, described as tall, fair-skinned, red-haired with green eyes, sometimes blonde with blue eyes, and beards; the older moai, with their Caucasian features, extended chins, and hint of goatee, are stylized images of these flood gods; to Tiwanaku, Puma Punku, and a third unrecognized site in the Andes to meet the ‘People of the Serpent’, described as very tall, fair-skinned, red-haired, and featuring elongated skulls and their DNA linked to the region of the Black Sea and what used to be Mesopotamia. We travel to Egypt to meet the Aku Shemsu Hor — Shining Ones, Followers of Horus, described as between eight-and-a-half to 10 feet tall; they too were longheads. The Aku Shemsu Hor might have had a presence on Malta. Tidal waves once dumped 7,000 people, animals, and utensils into the Hypogeum of Hal Saflieni, including hundreds of elongated skull people.

Freddy Silva is a best-selling author, and leading researcher of ancient civilizations, restricted history, sacred sites, and their interaction with consciousness. He is also a leading expert on crop circles.

He has published six books in six languages: The Missing Lands: Uncovering Earth’s Pre-flood Civilization; The Divine Blueprint: Temples, Power Places, and the Global Plan to Shape The Human Soul; The Lost Art of Resurrection: Initiation, Secret Chambers and the Quest for the Otherworld; First Templar Nation: How the Knights Templar Created Europe’s First Nation-state and a Refuge for the Grail; Secrets In The Fields: The Science and Mysticism of Crop Circles and Chartres Cathedral: The Missing or Heretic Guide
Described by one CEO as “perhaps the best metaphysical speaker in the world right now,” for two decades he has been an international keynote speaker, with notable appearances at the International Science and Consciousness Conference, the International Society For The Study Of Subtle Energies & Energy Medicine, and the Association for Research and Enlightenment, in addition to appearances on Gaia TV, History Channel, BBC, and radio shows such as Coast To Coast.

Available direct from the author at www.invisibletemple.com

Let Freddy and I take you on a journey to sacred site and WHY they were build with where – lye lines, to geometry, to the  elementals!

Freddy Silva is one of the world’s leading researchers of ancient systems of knowledge and the interaction between temples and consciousness.

He is also a best-selling author and film-maker.
He lectures internationally, with keynote presentations at the International Science and Consciousness Conference, and the International Society For The Study Of Subtle Energies & Energy Medicine, in addition to appearances on The History Channel, Discovery Channel, BBC, video documentaries and radio shows.

Jef Harve spent six years in the United States Navy and was inducted into a watcher group that infiltrated many of the Jesuit Illuminati controlled military organizations. He was assigned to EC Division, an electronics unit and worked in the Intelligence Center on board the now decommissioned aircraft carrier CV-67.

Today Jef is board certified in nutrition and specializes in homotoxicology for creating detoxification protocols utilizing homeopathics, oxygen species combined with hydrogen, and system specific plant-based endocrine adaptogens delivered by traditional means as well as holographic methods. Jef provides the scalar systems used for coding holograms to various practitioners and companies entering the field of holographics..

As a military trained remote viewer and radionics technologist he assists the brain in directing energy patterns for various remote field manipulation strategies including biological effects.

Do You QuantumThink?
New Thinking That Will Rock Your World

Dianne Collins
Author of Award-winning bestseller –
Do You QuantumThink?
New Thinking That Will Rock Your World

“My entire life has been devoted to the questions: How do we create the results we truly desire? With 6,000 years of wisdom available at the touch of a smart phone, how is it we’re still not living it?
From studying everything from physics to metaphysics I made a few life-altering discoveries that led me to create the QuantumThink® model—a system of thinking comprised of principles and practices that make it quick and easy for anyone to live the wisdom of science and spirituality in modern practical life—not just to know the principles—to finally embody them and apply them in business and politics, personally, professionally, and globally.
I’m not talking about another ‘how-to’—I am talking about a monumental wake-up in the way we think and live.”