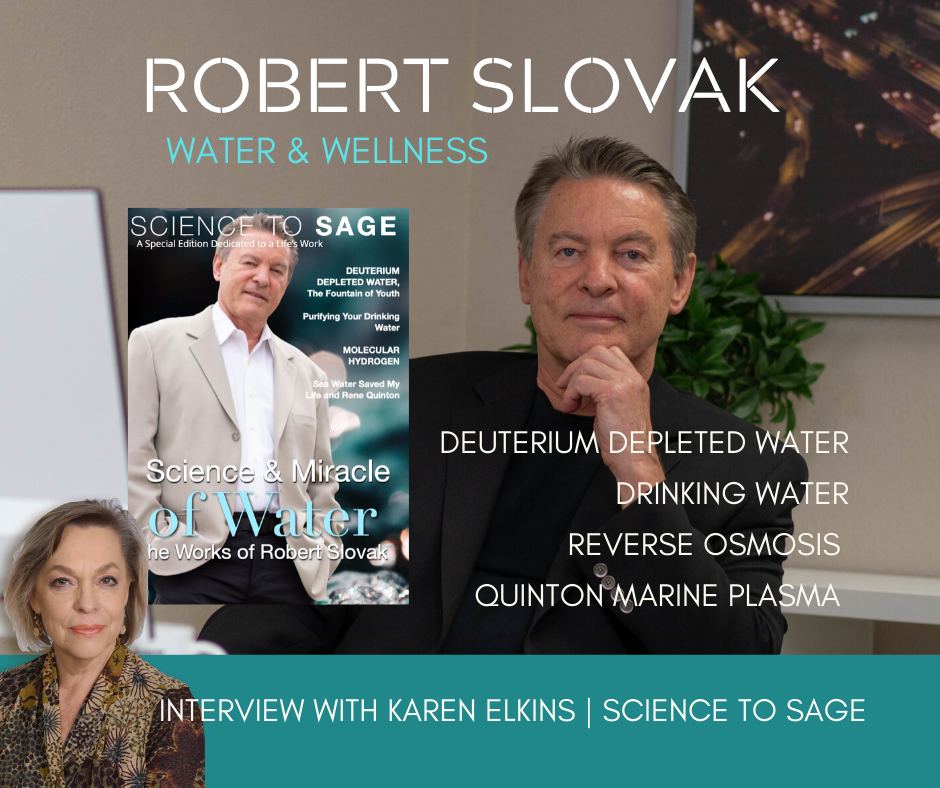 As a result of the rapid growth of RO applications, Robert’s ongoing seminars and a best-selling industry book on the subject of POU (Point of Use) Reverse Osmosis, he became a well-known figure in the water industry. In 1989 Water Factory Systems was purchased by CUNO Inc, a global leader in fluid treatment. Since then, it was acquired by the 3M Corporation, which continues to market many of their original products.

Robert officially retired from the US water industry in 1996 and went on to bring his knowledge and experience to Brazil, Asia and other international markets. He put together a team and published Agualatinomerica magazine to establish a legitimate water equipment and education infrastructure in Brazil and South America. His “students” continue to play a major role in Brazil’s water industry.

In 2004, while in a remote location of Brazil, Robert became seriously ill and was introduced to an obscure 1897 medical discovery known as Original Quinton Marine Plasma (after the famous revolutionary biologist René Quinton). Robert attributes his “jungle” survival to its remarkable healing properties. This ocean-harvested nutraceutical contains the entire Periodic Table of organo-complexed minerals & trace elements as well as essential and rare micronutrients and has been continuously produced for more than a century. Having been an avid student of health and nutrition science for decades, Robert recognized the remarkable history and efficacy of Quinton Marine Plasma in supporting a wide range of the most difficult health conditions and has distributed Quinton Marine Plasma to leading-edge clinics and health practitioners worldwide since 2008.

For the past nine years Robert’s focus has been on bringing a new nutraceutical breakthrough called “Molecular Hydrogen” (H2) to the medical profession and health-minded consumers. This “smallest molecule in the Universe” has been overlooked for its remarkable health benefits until now. With more than 800 worldwide health studies on the subject, physicians, researchers and clinicians have been proclaiming Molecular Hydrogen (H2) as the most unique and versatile antioxidant and signaling molecule. In 2010 Robert co-developed a practical way for everyone to benefit from this discovery by creating the first reactive hydrogen tablet that infuses water with a supersaturated concentration of molecular hydrogen (H2) gas. This proven nutraceutical is now in its 9th year of distribution in both professional medical and consumer markets.

In 2011 Robert became a founding investor in the Quicksilver Scientific Corp. that was developing a groundbreaking new technology to deliver nutrients and nutraceuticals to the cells. It is referred to as nano-encapsulated liposomes. In just a few years, Quicksilver Scientific established its scientific dominance in this growing field and is currently expanding its product scope and global distribution. Recently, several of the key formulas offered by Quicksilver Scientific have become a cornerstone in the ongoing battle against the Coronavirus.

While attending medical and wellness conferences throughout North America, Robert recognized the persistent minefield of water-related misinformation encountered by doctors, patients and consumers alike – that’s after spending nearly 50 years in the water technology industry. This unsettling experience soon turned into the motivation to do something about it and Water & Wellnesswas established in 2017. A team with more than 150 years of combined experience was assembled to create a product line of advanced Point of Use (POU) and Point of Entry (POE) water treatment systems for health and wellness minded consumers. In addition, a line of synergistic water additives was formulated for the consumer market including Quinton and QuintEssential minerals & trace elements, Active pH Restore alkalizing mineral powder, Active H2 ULTRA molecular H2 tablets and Active Ribose C high-bioavailability vitamin C.

Recently, Robert’s 20-year interest in Deuterium Depleted Water (DDW) took a new direction forward. With the revival of Soviet-era research from the 1960’s and recent announcements explaining the profound health benefits of DDW, Robert and his associate acted quickly in creating a new company, Litewater Scientific. Their strategy is to offer a more advanced and affordable brand of DDW for consumers and health practitioners. The Litewater brand of DDW is now available on www.drinklitewater.com in 1/2-liter (5 ppm) and 2-liter (10 ppm) bottles throughout North America.

Robert continues to be a very active figure in the rapidly expanding role of water in the wellness and anti-aging community, making appearances and presentations worldwide.